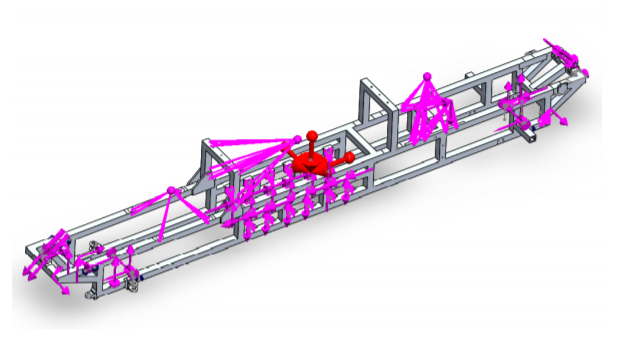 SpaceX and the Boring Company have run four student hyperloop competitions over the last five years in Hawthorne, CA. The challenge has been to design and build a fully functional hyperloop pod (minus the passenger compartment) that can travel the fastest in a 1200m vacuum tube and stop itself before the end wall. Paradigm Hyperloop is a multinational team consisting of students from Northeastern University, Memorial University of Newfoundland, and the College of the North Atlantic.

Northeastern has competed in all four competitions, however I have only had a hand in Comp 4 and preparation for the postponed Competition V. I served as a mechanical designer responsible for the pod chassis. I used Solidworks weldments to design a chassis that would be bale to support every other component of the pod. This meant constant communication with the other subsystems and TONS of iterations on the design. After each iteration I would set up a fully defined FEA study to determine if the current design could handle the various forces, especially the braking force, which could cause decelerations of up to 7G’s.

When I first took up this role, I was about a month into college with no FEA experience. The entire competition was an amazing learning experience, from watching how to weldments videos to setting up and running fully constrained chassis simulations in the parking lot of SpaceX in Hawthorne, CA. It took a lot of failing along the way, but by taking a “fail fast” mentality and trying to never make the same mistake twice we got closer to the finished product every time. At the end of the day, we were able to get 8th place in world. Now, we look forward to participating in The Boring Company’s Not-A-Boring Competition as well in 2021.