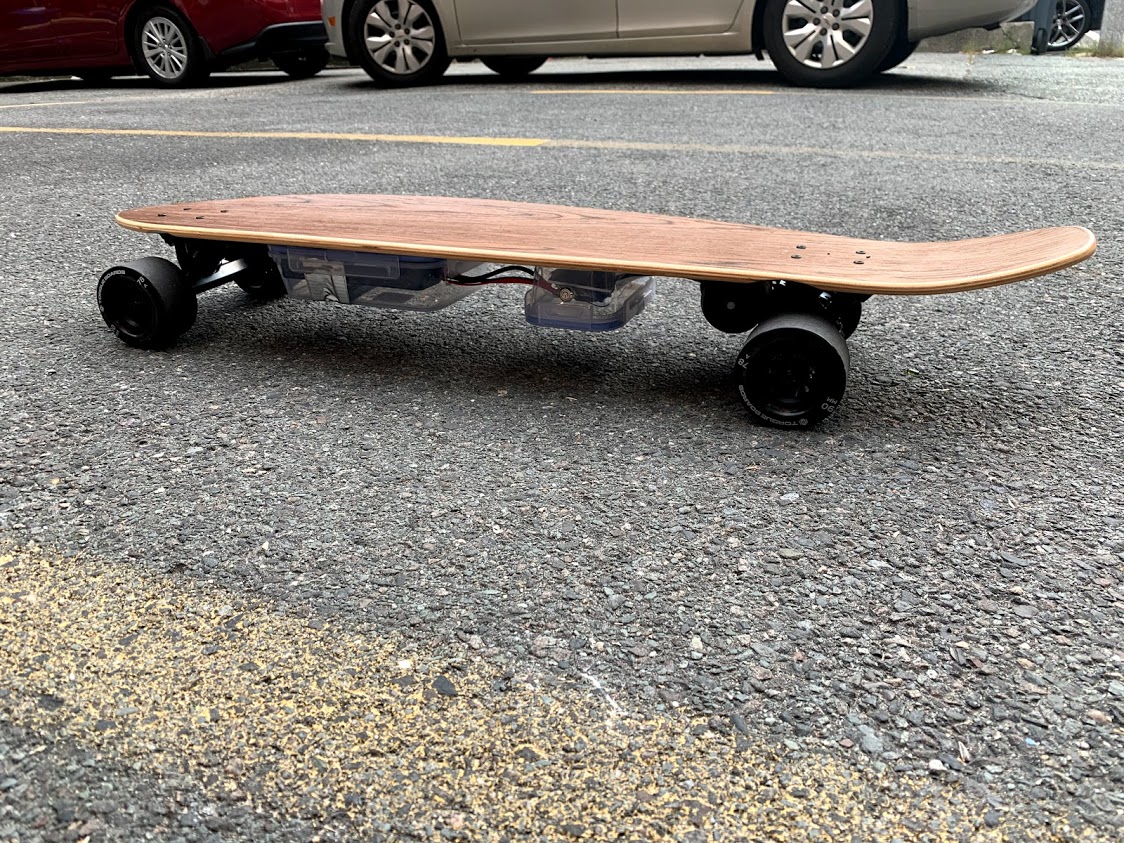 After not skateboarding in 10 years, I bought a nickel board freshman year. I loved it for getting around campus and being able to bring it into class with me. However, last fall I sprained my ankle playing Ultimate Frisbee, and then again falling off my board a month later, leaving me in crutches. I still have ankle issues now, which makes repeated pushing on a board painful. Seeking another quarantine project, I decided it was time to finally build the electric longboard I had been mulling over for months.

I identified the important components needed for this project. Then I began trying to identify the specs I wanted to design for. Based on a cost/performance balance, I chose a 180KV motor with a 6S3P battery which should hit around 20mph with a range of ~15 miles depending on power mode. I chose standard Caliper II trucks so that most motor mounts would be compatible. As far as the wheels I chose 90mm wheels, which are larger than the standard 83mm wheels in order to handle larger bumps and cracks on the city streets. I may potentially upgrade these further down the road as well.

I made sure the ESC was compatible with the battery and motor, as I have had to deal with that headache before developing a prototype at SharkNinja. For the deck of the board I chose a Dark Walnut due to its increased strength and rigidity. If the board flexes too much it will become unwieldy at higher speeds and make mounting electronics to the underside a pain. After finding the cheapest reliable sources for these major components and minor things like fasteners and spacer plates, I placed my orders and got ready for the fun part.

Once all the parts were in, I first assembled the standard skateboard parts (deck, trucks, wheels), then moved on to the drive wheel assembly. One belt pulley attaches directly to the drive wheel, while the other goes on the motor shaft. I attached the motor mount to the truck first, then put the belt around the wheel pulley and attached the wheel. The motor then screwed into the slots on the motor mount, and after putting the belt around the other pulley I slid the motor down to properly tension the belt and torqued down the screws. At this point I double-checked that the rotation of the truck would not cause the motor to hit the deck. While carrying out this process, I also worked on the electronics side. The motor control wires came with a 6pin connector even though there were only 5 wires, which made it incompatible with the ESC’s 5 pin port. To remedy this I removed the connector and wired it directly to the pins individually.

Now I had the motor spinning, but realized the belt wasn't parallel and was rubbing the wheel slightly due to the motor mount not being far enough over on the truck. A fillet on the truck was preventing it from moving further, so I disassembled the motor assembly and filed down the truck until the motor mount could slide evenly far enough over. Lastly, I mounted tupperware enclosures to the deck to hold the battery and ESC, and drilled holes in the plastic for the wires and power switch to pass freely.

I tested it without weight around my house a couple times, then took it to the Charles River Esplanade for a maiden voyage. It rode well, and I was able to easily hit 16.3mph on a flat path according to Strava. Since then I have ridden it across Boston and managed to climb significant hills and shown good battery life. I am happy with the performance so far and excited for potential upgrades in the future. Also most importantly, my ankle is happy.

Throughout this build I got to expand upon my planning and assembly skills. Undergoing a part selection process and building something up yourself creates a ton of decisions and opportunities to miss the little things. In my experience, those little things are the most critical part of any endeavor, and I was happy to run into them in this project. Now I have fresh reminders to check everything, like the full shape of everything so I don’t have to file something down in the future, or electrical connectors to make sure they are compatible. Perhaps more importantly, I also have a reminder that engineers are problem solvers, and when you hit an obstacle there always a way around it.